I just noted how I very much prefer the smaller shops to the big "superstores."  Some days, however, I just have to bite the bullet and go.  Like today.  I needed to find envelopes - plain mailing envelopes.  I haven't seen them in any of the smaller shops nearby and I didn't have time to go wandering around to find them, so I decided to go to Carrefour, because I knew that they had what I needed.

Of course, I took my iPhone.  So, how about let's go shopping Shanghai style?

We'll start with the familiar, that is with Imported Product. 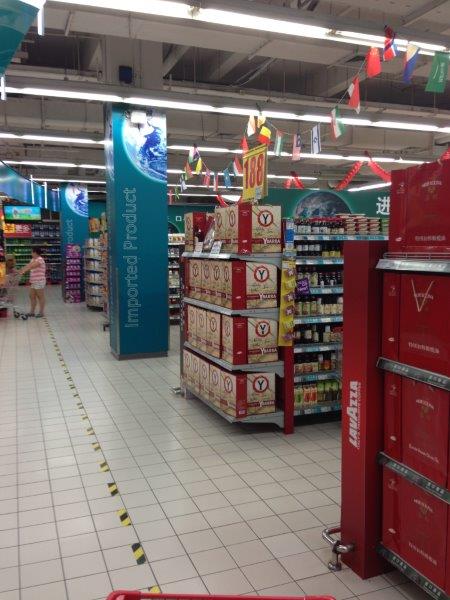 First, a bit of context.  To figure out cost in dollars, you need to take the yuan price and divide by six. That's not an exact exchange, but it's close enough.  Second, it's kind of hard to show scale here, but nearly all the items are in smaller containers than in the US - and in metric.  (I'm thanking Mr. and Mrs. Wengerd right now because, while it's been a bit of an adjustment, thanks to them I really did learn the metric system way back when.) 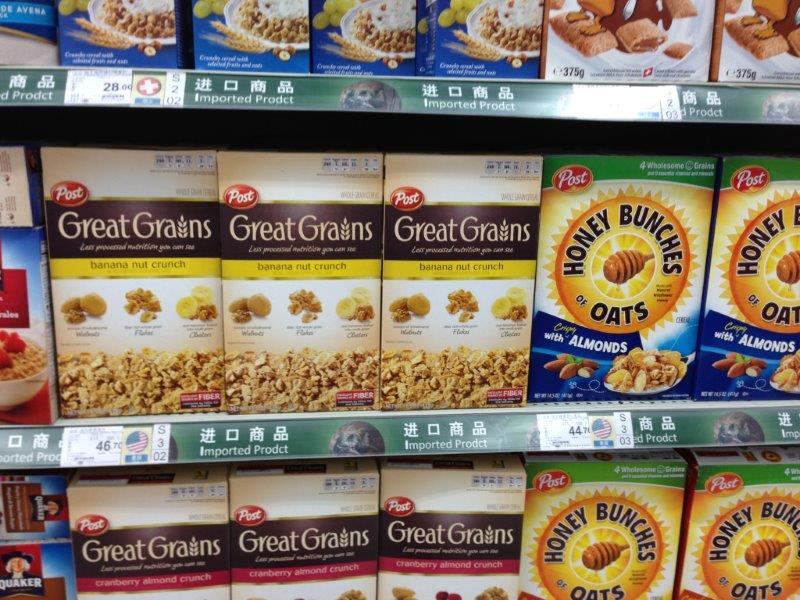 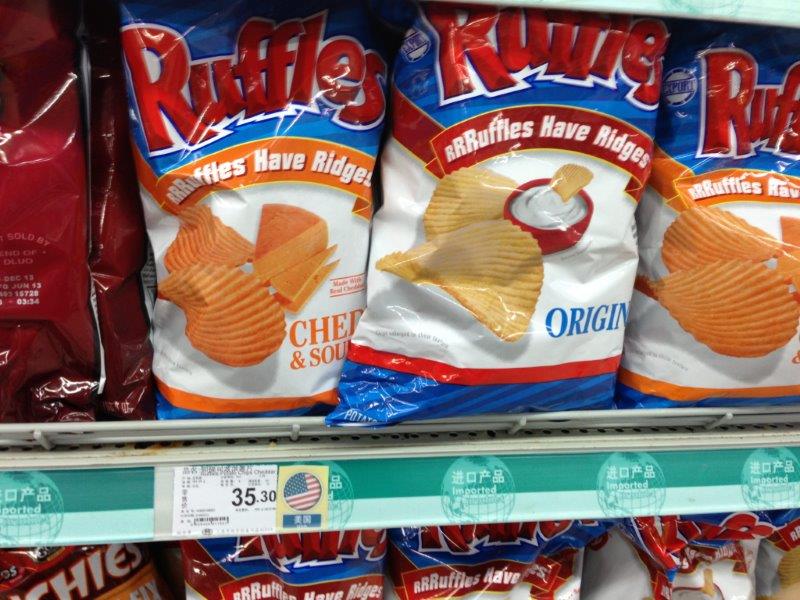 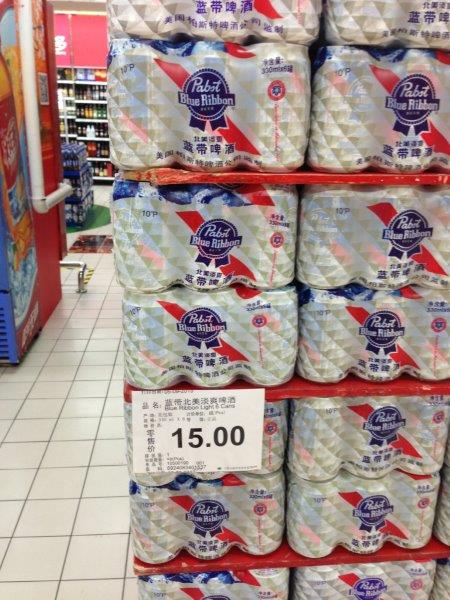 Ok, I'm sure that at some point I will be c-r-a-v-i-n-g something from this section but, right now, while I walk through this section just to see what's there, I'm strictly window shopping.  So, moving on to the more ... interesting (to me) ... aisles. 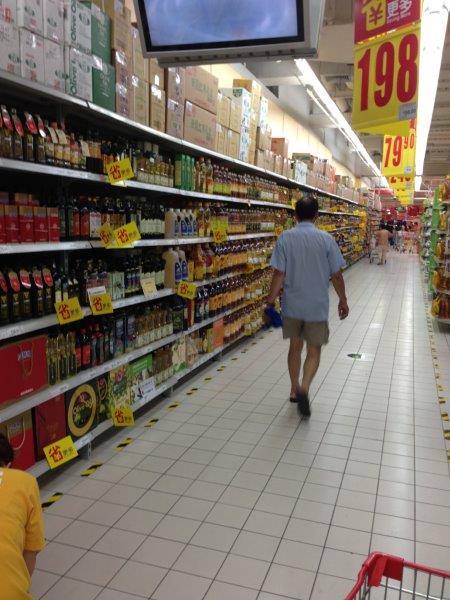 This incredible aisle probably explains why I'm still in the process of scrubbing down my once very-sticky kitchen:  that entire wall is full of cooking oils of every kind imaginable (and some I didn't imagine). 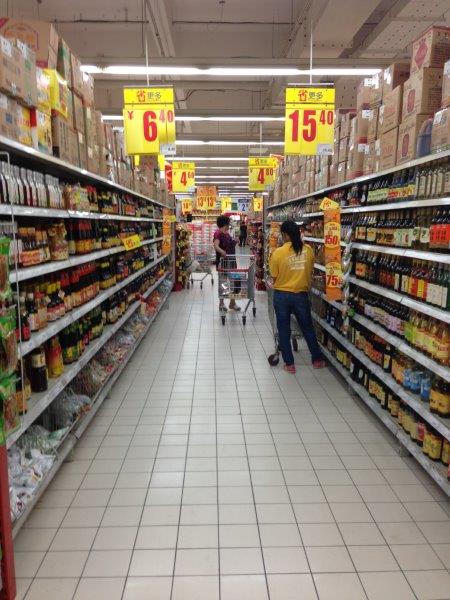 Now, I thought that soy sauce was soy sauce - that there were about as many varieties of soy sauce as, say, salad dressing.  I've been schooled on that one!  Both sides of this aisle are filled with of dozens and dozens of types and brands of soy sauces and a few related types of sauces. Of course, I can't tell the difference between most of them because less than 5% have English on them, but there clearly are differences, or they would't fill up both sides of this entire aisle. 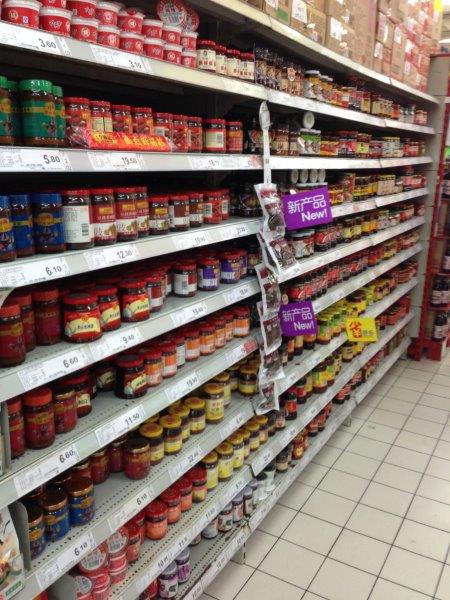 I love this aisle.  While I can't read the labels, I can see the ingredients on most and, as Jeff and I both love chilis of all sorts, I'm having fun in this aisle.  I bought several different jars here.  I've only used two so far, but they were both yummy!

Aside:  While these pictures were taken in a big superstore, the floor space dedicated to each type of food is pretty consistent in stores here, regardless of size.  In the smaller grocery stores, the aisles are smaller, of course, but there's still one big aisle of oils, one big aisle of soy sauces, a big section for chilis, and the like.

My favorite aisle is this one: 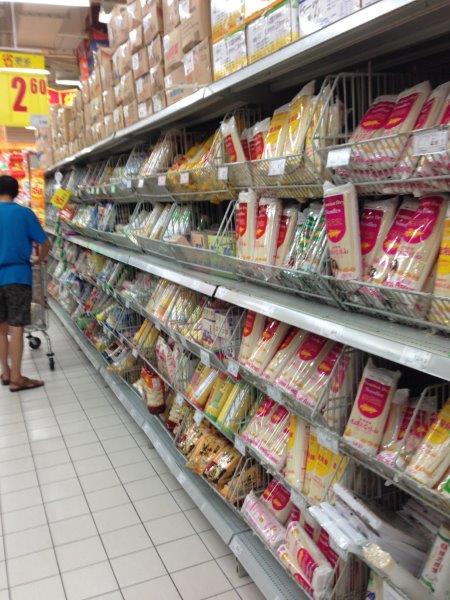 I love this aisle.  Noodles of every kind imaginable.  Yummy.  I hope to try them all while I'm here.  The rice aisle) is actually bigger, but while I'm not a big rice fan, I've not yet met a noodle I didn't love. And, there's another aisle nearby that has different kinds of "noodle-like" bags, but they're actually made of kelp, various seaweeds and the like.  I bought a bag of kelp ones to try too. 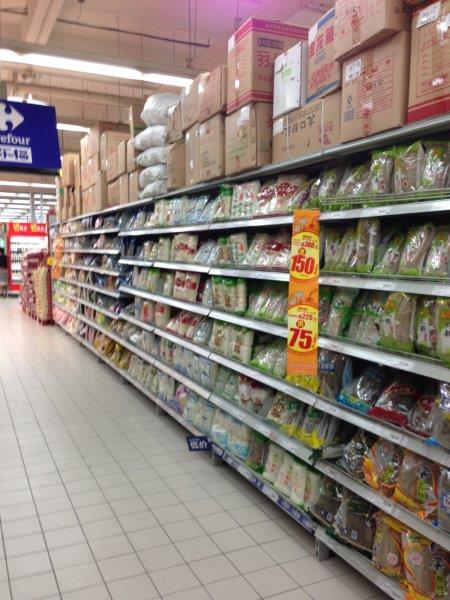 Obviously, tea is huge here too.  In addition to the very big two-sided aisle of packaged dried teas, there is a "bulk product" tea section, where you can mix and match the flowers, tea leaves, and related aromatics yourself. 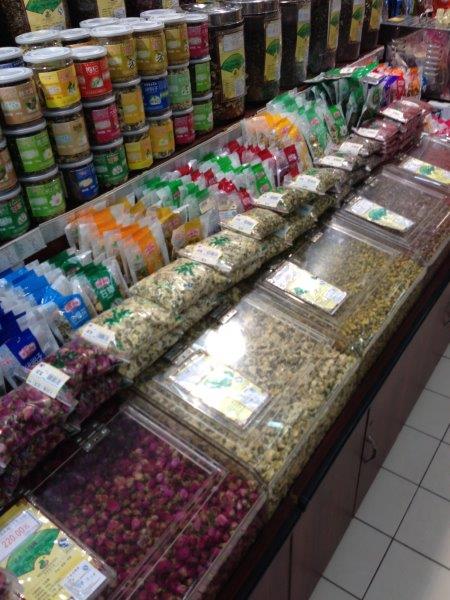 Of course, you can get rice in bulk too... 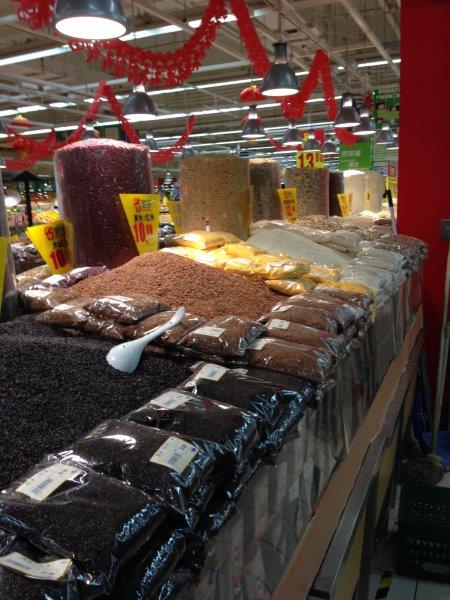 Most superstores have a pretty big meat section.  I have to say though, that I've not before seen meat sections as big as they are in the two different superstores I've visited here.   A partial survey .... 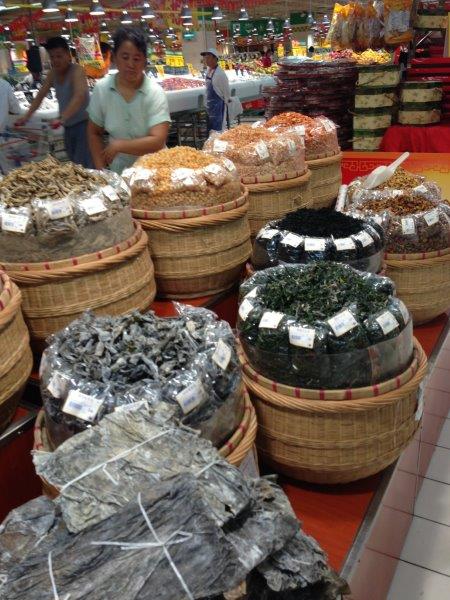 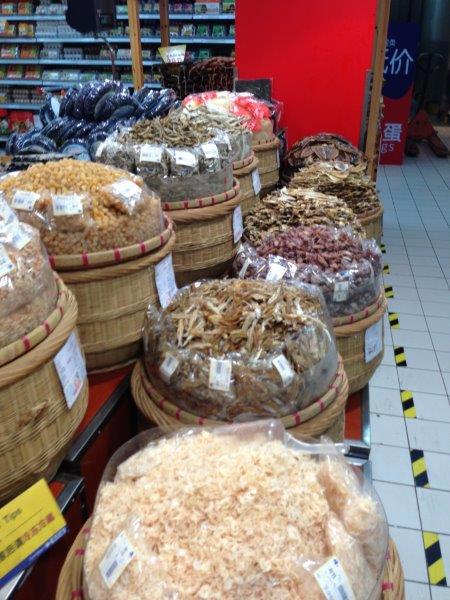 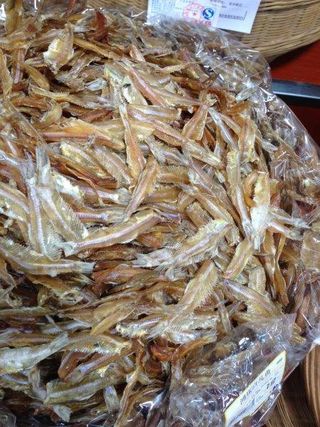 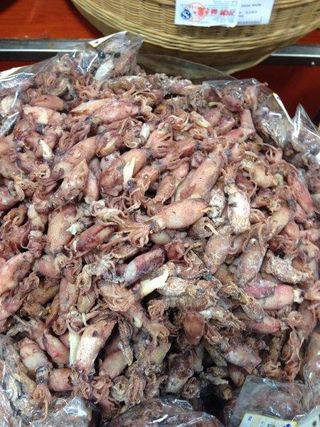 Now, for the fresh meat section... 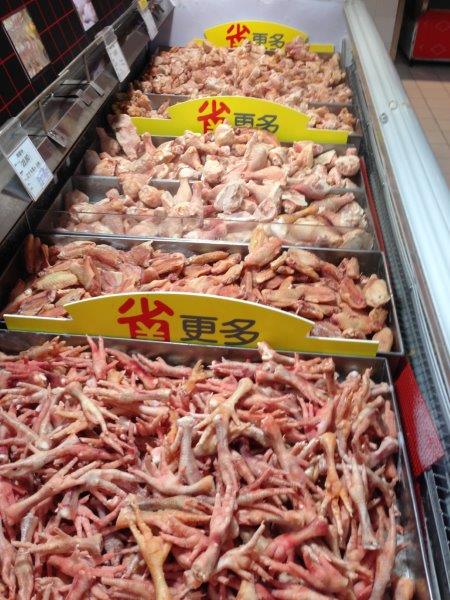 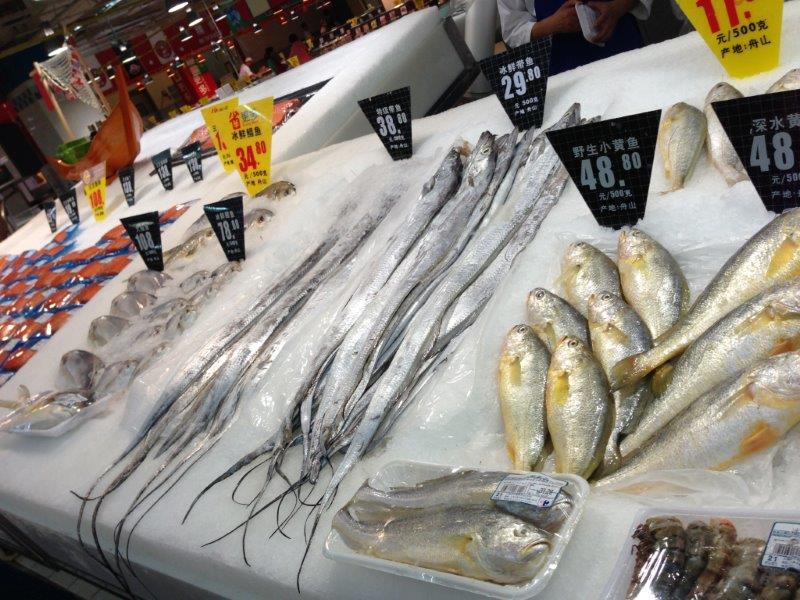 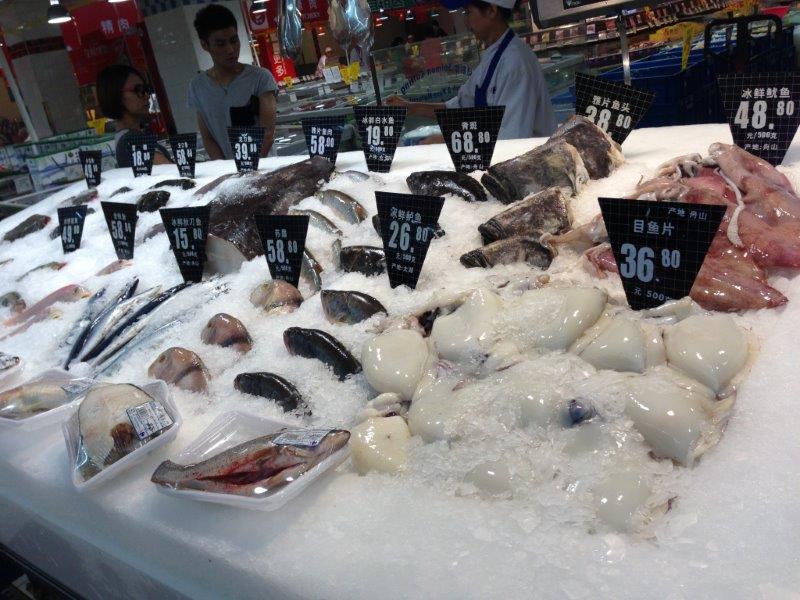 Or other seafood.  But if you insist on having it truly fresh.... 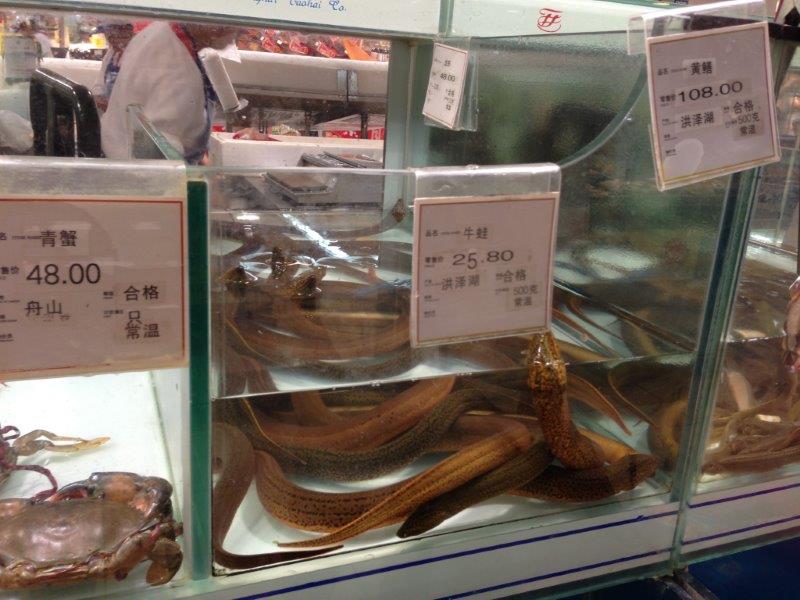 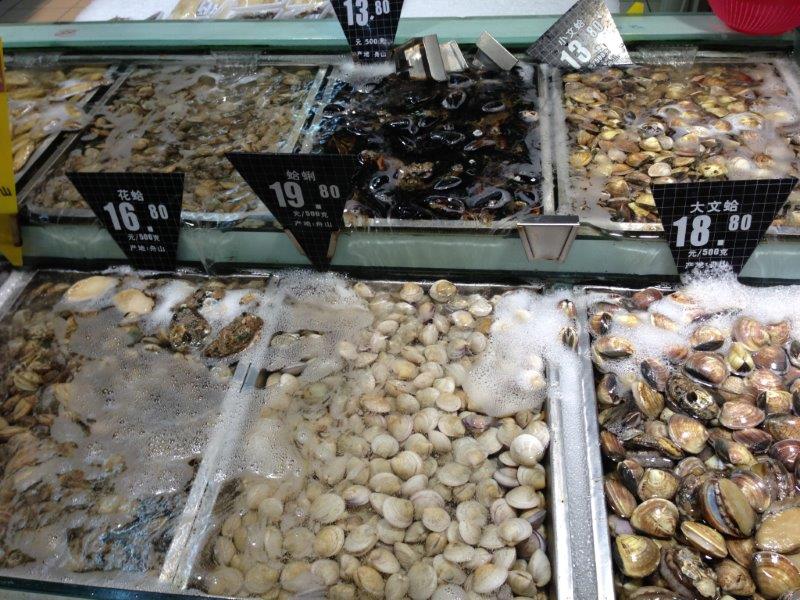 Of course, there are a lot of working moms in Shanghai looking for fresh prepared food, so there's a section of prepared meats as well: 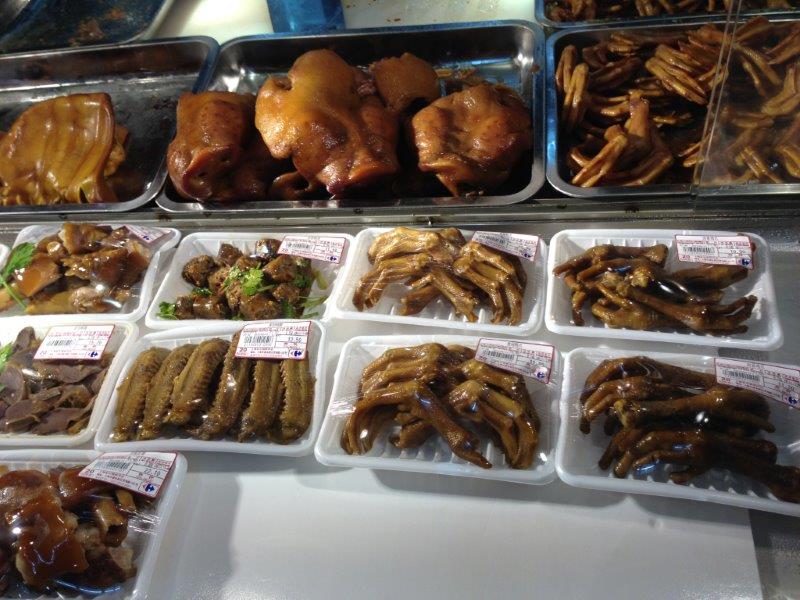 For those who prefer tofu, there's an entire station of a few dozen varieties from which you can choose: There is a similar section of prepared veggies and other side dishes nearby.  And, as with any grocery store, there's a big produce section: 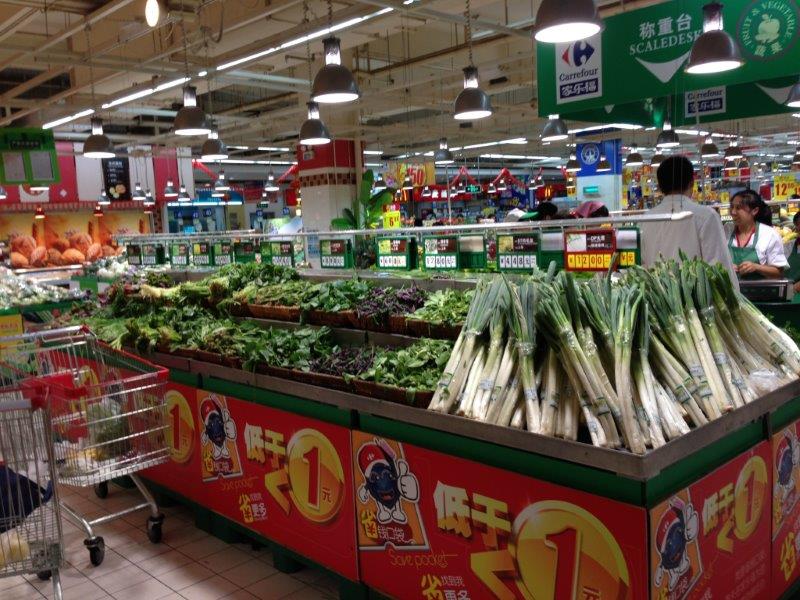 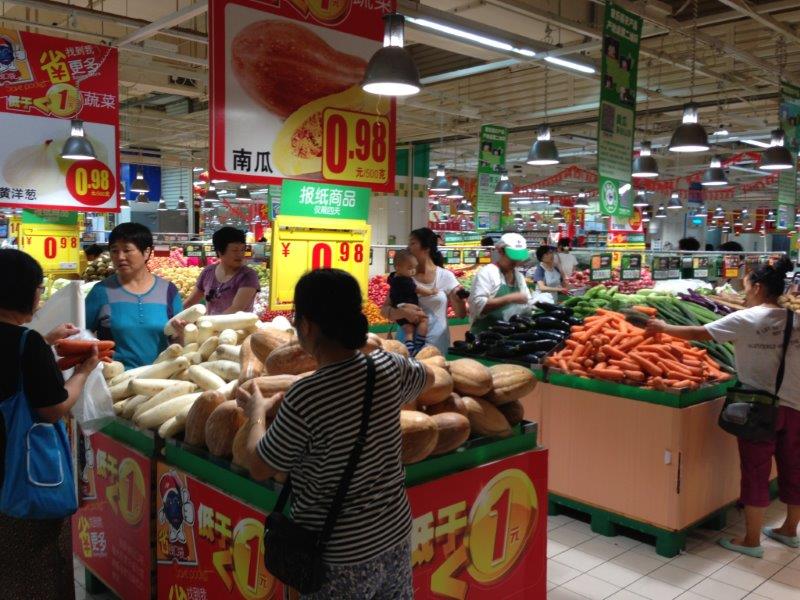 Portion of the Produce Section.

There is a frozen food section, a smaller yoghurt/dairy section, and a few others, but -- as I was snapping pics, I suddenly remembered that I'd gone to Carrefour because I was in a hurry, but somehow 45 minutes had flown by again.

That being said, I couldn't resist one last shot, just for the folks back "homehome" who shop at Hilltop: 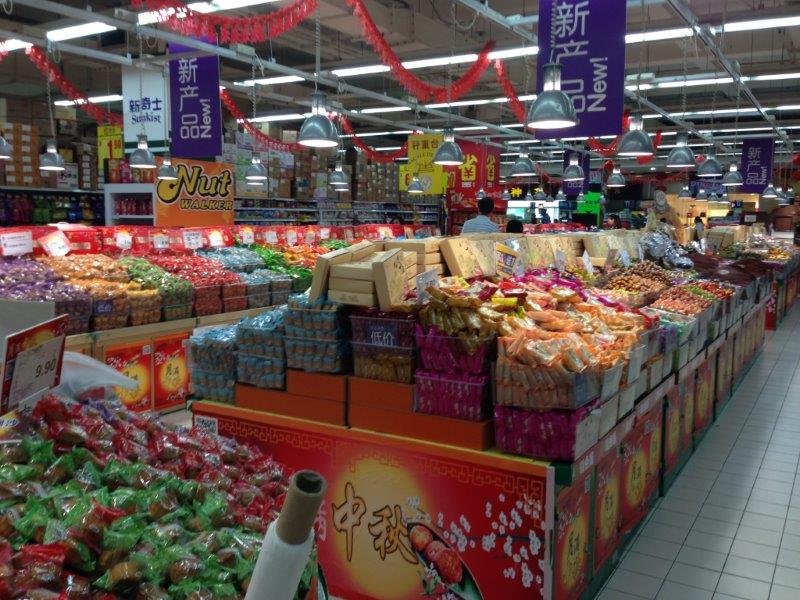 Yes, the sweet tooth is alive and well here.  In addition to this huge candy section, there's an entire two-sided aisle full of cookies and the like.

And, after nearly an hour of sensory overload, it was time to go home!

Penny, that's great. (We had a SuperRanch store in PHX that had some of this - just nothing near the scale -- AND, as I thought I really didn't like Chinese food, I wasn't all that interested in exploring the aisles.)

Recipe cards would be great - I'll keep an eye out. Right now, I'm just using the local stuff in lieu of usual stuff in recipes I already know. (As I don't cook much, I don't know that many ...) It *is* fun to experiment though -- and given the huge difference in cost between the "imported" options and the local options, I'm very motivated to figure out how to cook stuff with the local stuff.

This looks pretty familiar to me, as we have a couple of Asian supermarkets in Boston's Chinatown and Allston neighborhoods (Super88). I'm always fascinated to go, leery to experiment, and unwilling to carry more than a bag or two. (We use Peapod to deliver our regular groceries.)

The live fish are interesting but I feel bad doing the Caesar routine -- "That one has offended me. It shall die." The tanks are labelled "Big Head Fish," "Canada Fish," etc. Somehow, the English labels don't actually help. I've never seen anything like the shellfish in your market, though! Wider variety of fish I haven't seen. Atlantic v. Pacific, I suspect.

Here, we don't have the bins of dried meats and fish. (Except for salt cod, but that's also in a few other stores. New England after all.) Everything has to be shrink-wrapped. We do have a huge frozen meats section. Birds from 2" long up to turkeys, with and without heads, all without feathers. Frog legs from 2" up to Russian wrestler size. Well, 18 inches and plump.

I'm much more adventurous in the noodle section. There's a sweet potato powder one that's gluten-free. We also have a huuuuuge Ramen Noodle section. I brought my nephew there a few years ago, and he bought 4 each of 30 flavors. The shipping cost more than the noodles! They also seem to sell the powder separately in jars. At least, the jars are in that section.

I'm also fine with experimenting with the fruits and veggies up to a point. We've tried Dragon Fruit, for example. Also many types of sauteed fungus. (Enough garlic and soy sauce make most fungus wonderful.) Some carrots are about the length and thickness of my arm. I suspect that's for decorative uses and/or matchstick cuts. Or weaponry. One carrot is more than we would use in a month.

My brief experimentation with the soy sauce section clashed with my Yankee cheapness, though. I enthusiastically bought a lovely bottle of something, but it tasted burnt. Nasty actually. The second bottle was flavorless. So with 4 bottles of soy sauce (low-salt and reg Kikkomon), I stopped. I can't throw them out, and I can't keep collecting!

Now I am feeling an urge to go experiment. Next week I should be walking enough to try a trip. I do wish they had recipe cards or something -- with pictures. If you find a site, let me know.

This is only a preview. Your comment has not yet been posted.

The letters and numbers you entered did not match the image. Please try again.

As a final step before posting your comment, enter the letters and numbers you see in the image below. This prevents automated programs from posting comments.

Having trouble reading this image? View an alternate.

(Name is required. Email address will not be displayed with the comment.)