"Would you see the miracle in that?"

"What if you allowed your God to exist in the simple words of compassion others offer to you? What if faith is the way it feels to lay your hand on your daughter's sacred body? What if the greatest beauty of the day is the shaft of sunlight through your window? What if the worst thing happened and you rose anyway? What if you trusted in the human scale? What if you listened harder to the story of the man on the cross who found a way to endure his suffering than to the one about the impossible magic of the Messiah? Would you see the miracle in that?"

So maybe it's the timing of it all -- I read this book during our Rocio Del Mar liveaboard vacation earlier this month (which, by the way, was fantastic yet again and we plan to do it again next year, but more on that another time) -- which occurred smack dab in the middle of packing off to move 8,000+ miles from my birth family and my in-love family, and leave the career I've had 19.9 years, and leave the country and state and city I love ...

... but I enjoyed ... or, more accurately stated, I was edified by ... Cheryl Strayed's Tiny Beautiful Things more than any other book I've read in, well, years.  I haven't stopped, re-read, re-read out loud, then highlighted so many portions of a book since reading Father Gregory Boyle's Tattoos on the Heart: The Power of Boundless Compassion a few years ago.

And there are just so many things she said that keep bouncing around my head ... sometimes as a whisper, other times so loud it drowns out everything else for a moment.  It'd probably be violating some copyright law to post all the "moments" that moved me in one post, so ... for today, I'll just the one that speaks to me on Sundays ...

Majerle and Gracie will be traveling in style!

Majerle and Gracie are coming with us to Shanghai.   Thanks to my sister, they're going to travel in style! 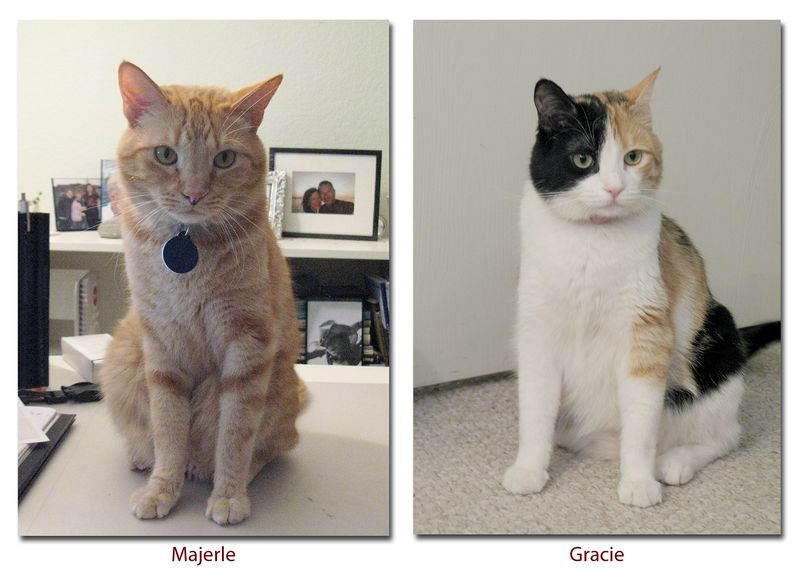 A couple weeks ago, when I was "spazzing" about ... well ... everything, my sister Tina decided to come visit to help out.  And help out she did.  While she was here, we sold my Eos (can't say i was too upset about losing that one); got quotes on the other car; found and set up an accessible storage unit, sorted the remaining stuff (accessible storage, permanent storage, and find a new home) ... and least a dozen other things I can't recall at the moment.

On top of all that, she offered to decorate Majerle and Gracie's travel crates.  Now, all my stuff was packed up, so this is what she had to work with: 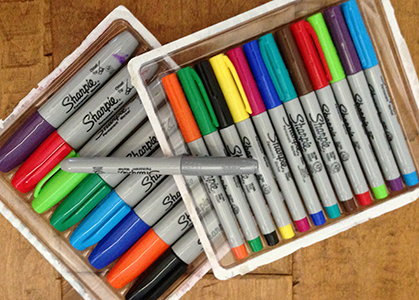 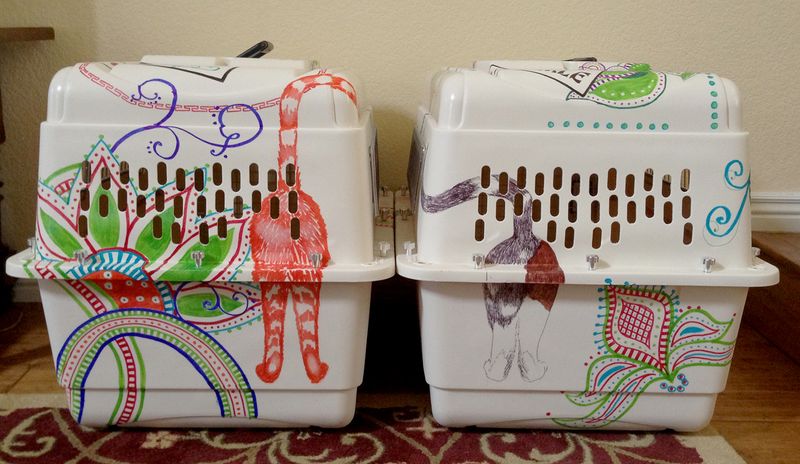 I just LOVE them, so cannot resist showing the details.  So, here are pics of the tops and sides of each one.  (The cool thing is that regardless of what angle you're at, you can tell immediately whose crate it is!) 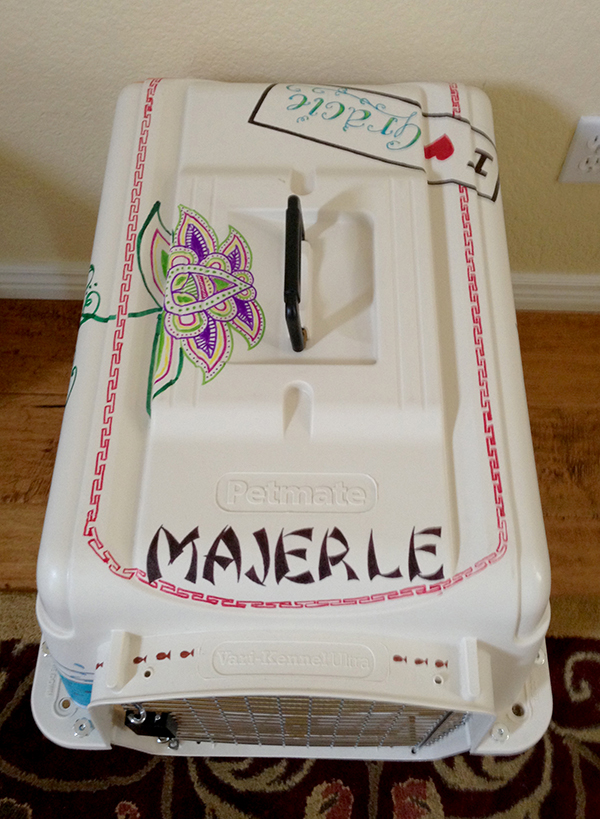 Side with Suns Logo (since he's named after "Thunder Dan," the great Suns player). 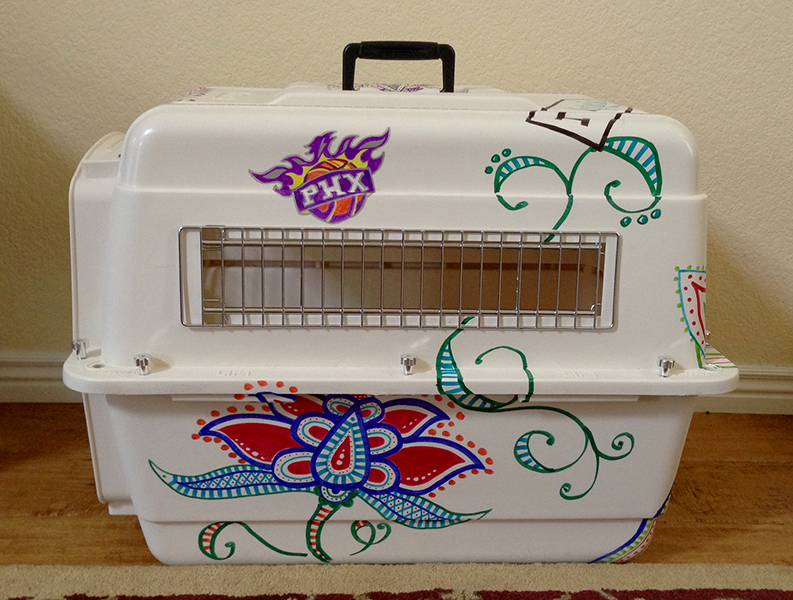 Side with his orange-tabby tail and fish bowl. (Majerle loves these little fish-shaped treats that Gracie just won't even touch). 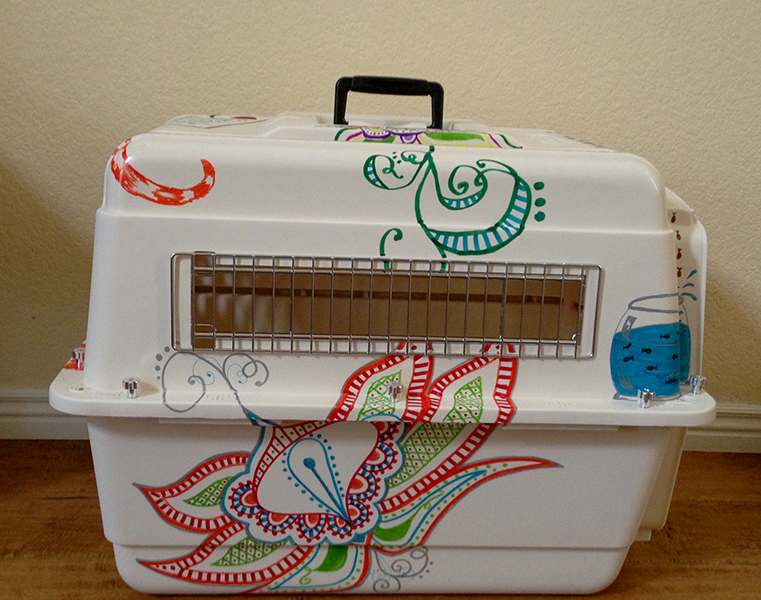 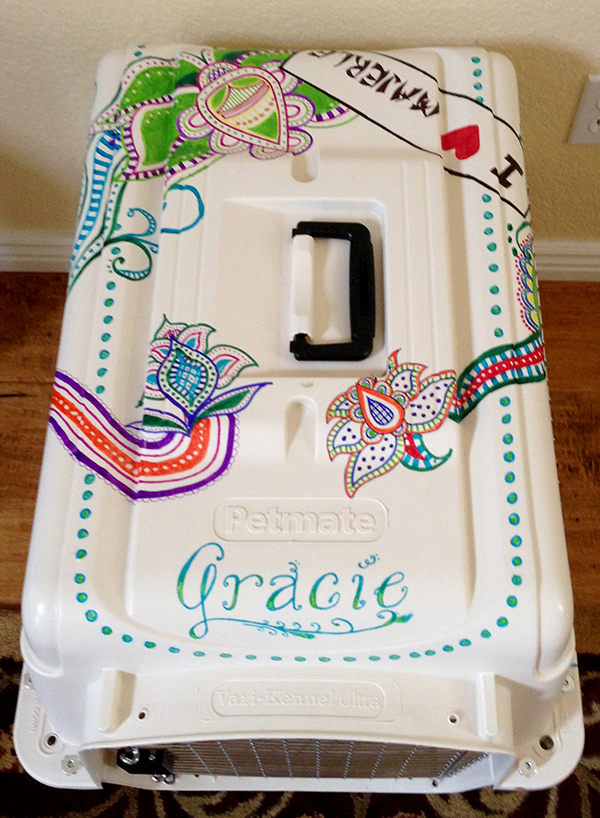 Side with Dbacks Logo (since she is named after Mark Grace, and with 2001 logo, since that's what he wore). 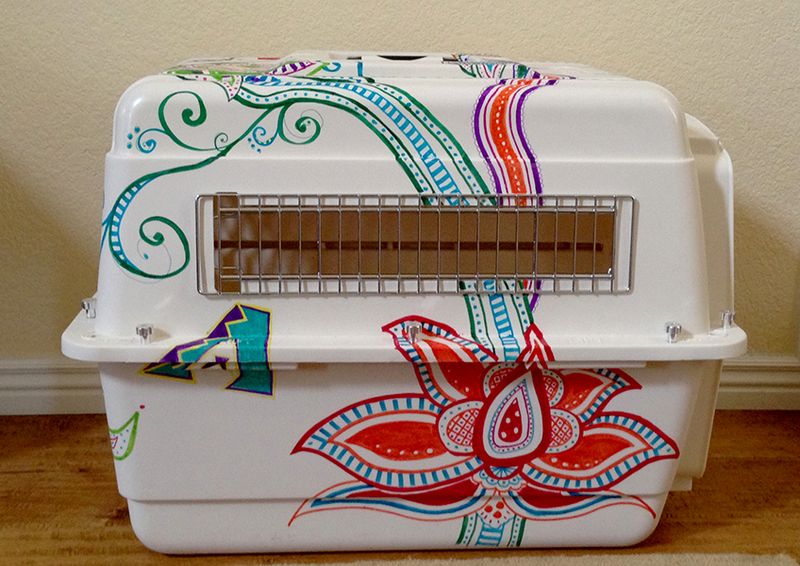 Side with Gracie's (mostly) black tail. 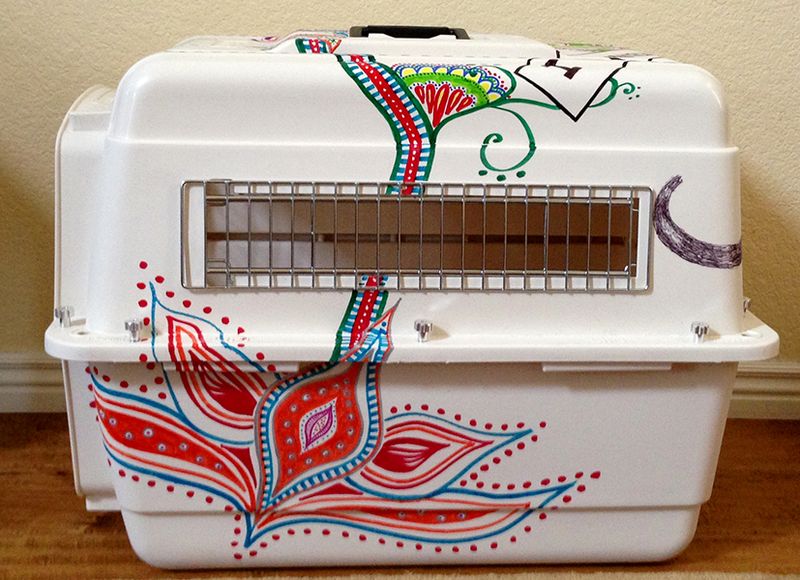 I just think they're the coolest critter travel crates in the whole wide world!  (And I'm only a teensy bit prejudiced of course...)

About bringing Majerle and Gracie with us, I read lots and lots of stuff about importing pets to China, and spoke with a couple people with real world experience.  One friend managed to successfully get her dog to Shanghai by herself, without (any major) incidents.  Another friend retained a pet relocation company to bring her two cats to Shanghai.

After much research, and knowing that I still am working and also that I have a minor tendency to forget certain things like important dates, and get certain paperwork bollixed up, I decided to go with a relocation company.  Since my friend had only positive things to say about the one she used -- and my comparative research indicated that they provided (by far) the best "bang for the buck," I decided to go with them:  PetRelocation.com.

So far, my experience has been all positive - even on the day I had a total freak out thinking that part of the process was irreparably messed up and the cats coudn't come with us after all - least not at the same time we were going.  (And Tobi, my "dedicated client care specialist," didn't even laugh at me, though she probably should have ::::blushing::::)

That whole episode is another story for another time.  All I'll say now is that after a few hours of being totally upset based on information I got from someone ELSE, I decided to contact her to see what could be done.  Tobi responded in just a few moments and immediately allayed my fears, explaining why ... everything was perfectly ok.   And, I learned to stop reading what others write and just trust that Tobi and PetRelocation know what they're doing after all!

Of course, the final proof will be in the pudding -- i.e., when Majerle and Gracie join us - safe and sound - in our new place in late August.

I'll keep you posted on that! 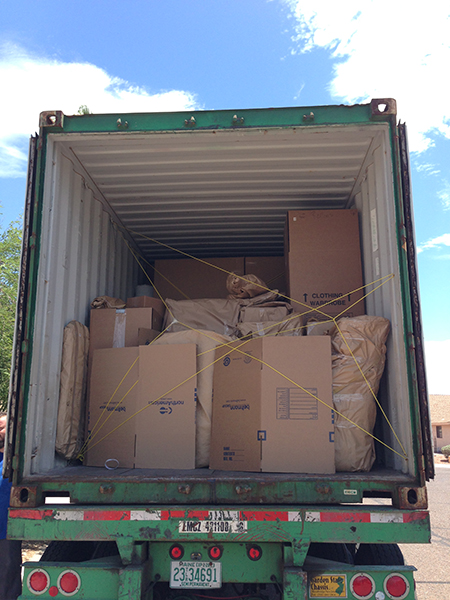 Yep.  Although I'm still here for another couple weeks, the movers came July 18th and packed and loaded the air shipment, then packed the sea shipment.  And, on July 19th, they loaded up the sea shipment.

The estimator reported that we were over limit.  Harumph!  There's LOTS of room left in that 20' container!

(This is probably a good thing -- more room to bring treasures back!!)

(Clearly, I'm still getting the hang of this all, as it's been a month since I last posted even though a ton of stuff has happened... so a few new posts coming up to catch up...)

So, we officially have a place to live in Shanghai - though not the one I selected while there last month.  That apartment was on the 60th floor with an awesome view that reminded me of my view in Chicago.

Alas, the landlord couldn't make up his mind whether to rent to us or to his friend from Hong Kong who would be moving there soon so -- after two weeks of back and forth -- we decided to move on.

So, our agent sent me a passel of pictures of other potential places and I picked our place from those, with hopes that reality will be close to the pics!!

Our place will be in the same building as the one I visited - just on the north side instead of south side, and on the 49th floor instead of the 60th.  Otherwise, they're pretty similar.   We still have a pretty great view, I think ...

From the entry way, looking west into the living/dining room... 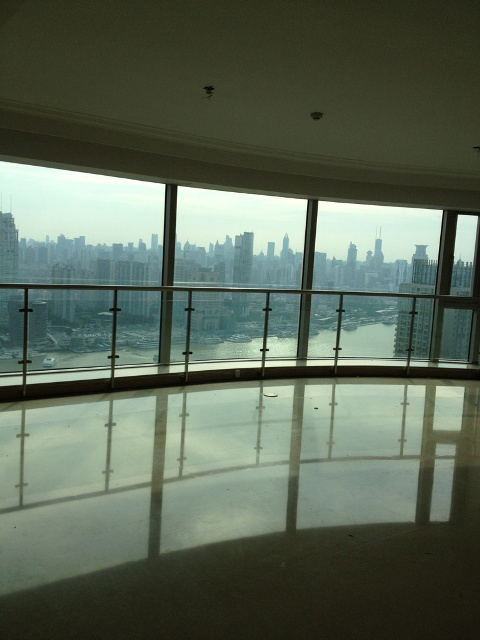 View from within the living room...

And, finally, view from windows themselves...

And, the great thing about this place is that we have both a dedicated guest room (hint hint) ... 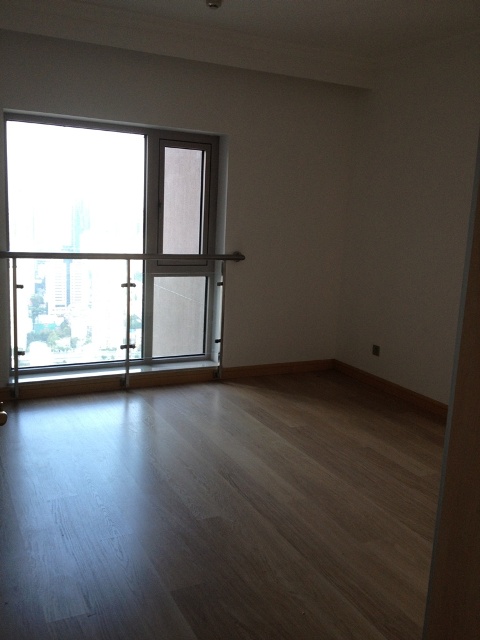 and a "multipurpose" room that will have a sofabed (hint hint). 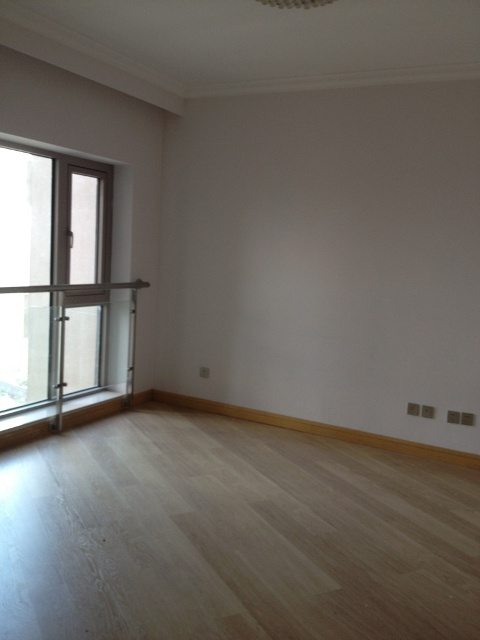 There are no "closets" per se anywhere, but the bedrooms have wardrobes ... 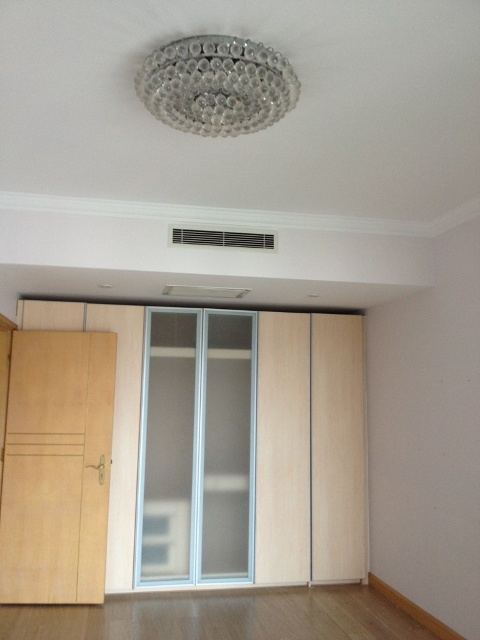 ...and our master bedroom has an open walk-through with more closet space than we have now! 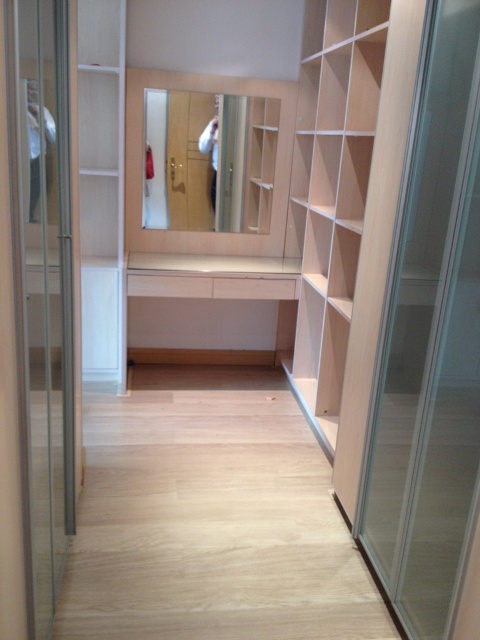 ... and another great view of the city. 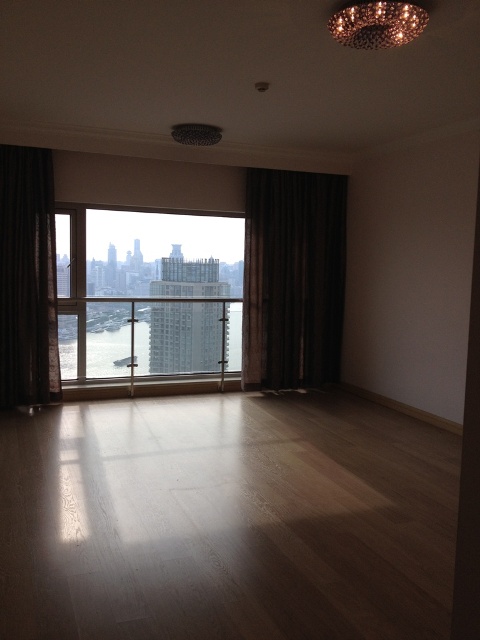 The kitchen is a galley kitchen.

(That door leads out to the washroom and an "external" (non-climate controlled) storage room.) 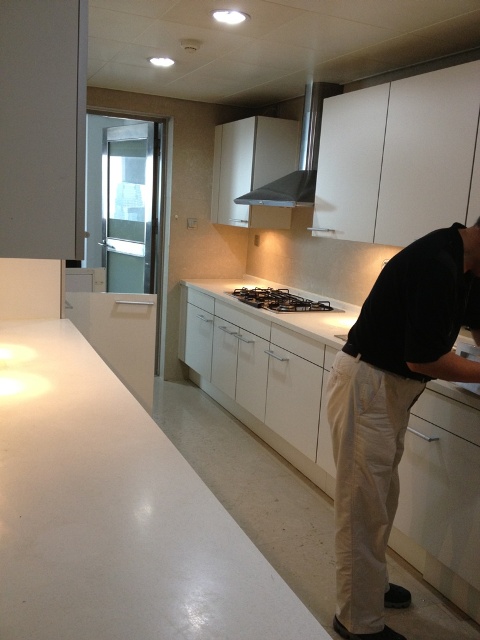 And the office - where early morning and late night work calls back to the US will take place - is on this side of the apartment - as far as possible away from our bedroom! 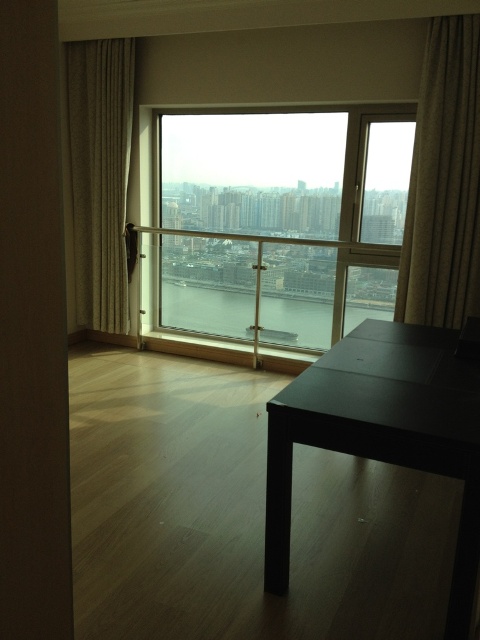 So ... this will be "our place" -- sometime in the next month, when we finally do the actual move.