So, the moving coordinator came by the house (and storage unit) today.

Suddenly, i'm feeling incredibly overwhelmed.   We will be packing for the move in two parts -- or, really, 2.5 parts.  Except I can't actually pack ANYTHING -- they must pack for insurance purposes.  (Which makes it WORSE.)

So, right now, they will come in mid-July to pack up things going to SHA via oceanliner.

Then, couple weeks later, they'll come back to pack up things (a) going to storage and (b) going to SHA via air transport.

Although I can't pack, I'm supposed to "sort" things so that the movers/packers can efficiently get to what they're supposed to pack in July ...  Except not in boxes, because that just makes more work for them.

I walk in one room thinking, ok, I can do this room. Then, overwhelmed, walk out and into the next ... rinse and repeat.

Come late September (assuming no delay in ocean shipment), this'll all be but a memory but ... right now .... yikes!

Getting over the aversion to Chinese food

Ok, so I’ve only spent a total of six days in Shanghai, but I have to say that the biggest surprise of all so far is … the food.

Now, for some context: Chinese food – the kind we get here in the US – is my absolute LEAST favorite food ever. I love Japanese food, Vietnamese food, Indian food, and like most Thai food, but I have never liked Chinese food. In fact, I so disliked Chinese food that way back when, when I worked in an actual office setting, when someone on my floor brought Chinese food back to their desk for lunch, I had to go sit on another floor. I so dislike Chinese food that I get up and to out when someone bring it to their seat at the ball park ... anywhere near me.  I smell it and ugh.... In short, I pretty much can't stand it.

Frankly, I didn't think this "problem" would be that big a deal in Shanghai, because there are many restaurants of every type. (Papa Johns, KFCs, Pizza Huts are more ubiquitous than Starbucks!). I saw Mexican restaurants, Japanese, Thai, Korean, American, German … pretty much every type of food one might get in any large city.   So, anyways, I wasn’t really that worried about the whole I-hate-Chinese-Food issue.

But wow have I been surprised -- and happily so.   On this last trip last week, I ate at four different Chinese restaurants. And they were each delicious!! At the one we ate at our last night, our appetizer was a set of spring rolls made of very thinly julienned wrapped in thinly sliced ham, with an incredible, light sauce. For our meal, we had the most amazing fish EVER. It was so succulent and had such an incredible sauce – it was, truly, scrumptious. We also had Chinese kale (actually, just the stems), and some pork dish. (Ok, the sauce on the pork dish was a little too sweet for my taste, but it was ok and, anyway, I was full from all the other great stuff!) 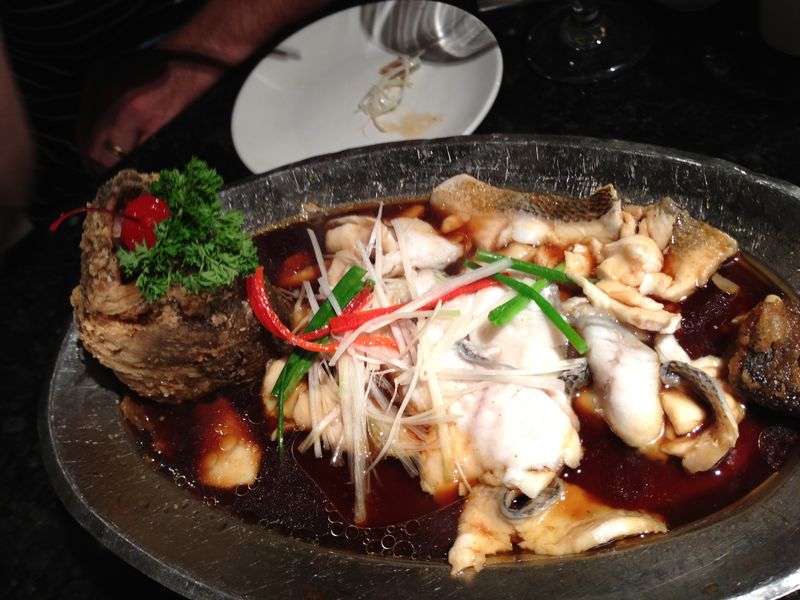 The most delicious fish ever!

We also had our first bottle of wine produced in China. Hmmm. Intriguing. (Or, as J would say, interesting … like a bug?) It was a completely colorless “white wine.” Actually, it was very drinkable. Very mild taste. 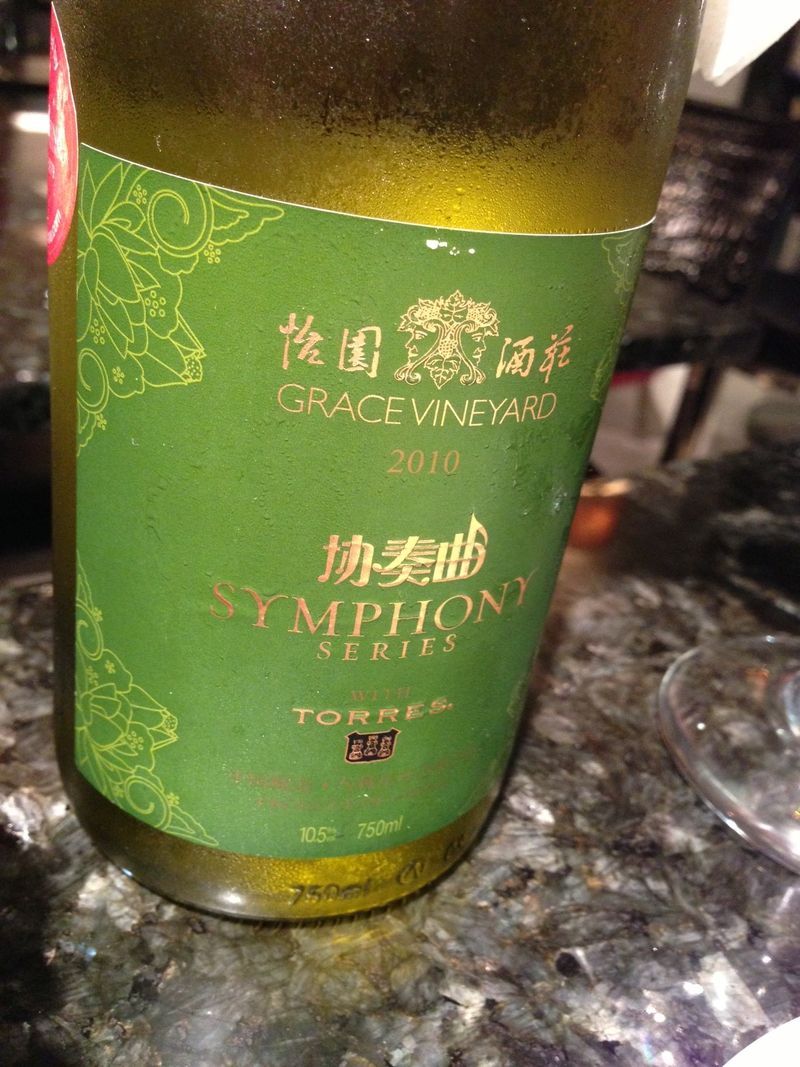 Our first Chinese-produced bottle of wine.  Interesting ... but drinkable.

The star of the meal was the fish. (Sorry but I can't recall the name of the restaurant - will have to find that and edit.  It wasn’t a fancy restaurant by any stretch, but the food really was fantastic.

Oh, and the bill was pretty fantastic too.  Total cost for entire meal was about 168RMB (about $27). And this was the most expensive Chinese meal we had the entire week.  Our other meals ranged from about 86 RMB to 120 RMB.

To be clear, you generally can't get a single small salad and a beer for that price at any of the "western/expat" places - they are all quite expensive.  But the local places?  Amazing food for amazing prices.

Yeah, I think I'm getting way over my "thing" about hating Chinese food.  All it took was actually experiencing ... well ... real Chinese food!

Things to know about Shanghai:  Always clean your ears before going to the hair salon.

Because your shampoo assistant will ... be cleaning your ears - with a Q-Tip.

And you will have the most amazing shampoo of your life too.  But it won't be at the sink the way it is in the US.  Instead, you'll be seated at the hair station and the shampooer will have a small squeeze bottle of water and some shampoo and will work your hair into a this amazing lather (without spilling a drop of ... anything .... anywhere) for about 30 minutes or so.  And -- as with virtually any salon service, apparently -- you'll also get a shoulder, neck, and head cleaning massage.

Only after being lathered for more than 20 minutes will you be escorted to the sink to be rinsed.

Oh - and you don't sit in a seat either.  You will essentially recline on a sort of massage table, while your hair is "rinsed" for ... many minutes, and - again - your head, neck, and shoulders massaged.  The rinse doesn't last quite as long as the shampoo (least for those with long hair), but almost.  Has to be at least 20 minutes.

Then - about an hour after you walked in the salon - you'll be ready for the blow dry.  Which will be as relaxing and wonderful as the shampoo/rinse process (sans the q-tip thing) - and will take about another 30-45 minutes.  Not sure what the "trick" was, but my style lasted in Shanghai 80% humidity for two full days!

Oh, and, for budgeting purposes, if you want to really splurge and get the most expensive option for this nearly 2 hour experience, be prepared to pay 128 RMB.

Now, my experience here is one instance at one salon.  I'll report back if this is the "normal" experience or if I just got incredibly lucky.

So, we're moving to Shanghai, China.

As soon as I learned of the possibility -- back in late April or early May -- I thought about maybe blogging the whole experience, but just didn't get around to it.  Then I worried that I'd missed too many initial things, so the blog wouldn't be "complete."  Then I couldn't figure out a good name.

Then I just decided to start now, with plans to go back and fill in gaps if and when the mood strikes me.  Hopefully, a cool name will hit me at some point in the future, but for now -- am just going for it.